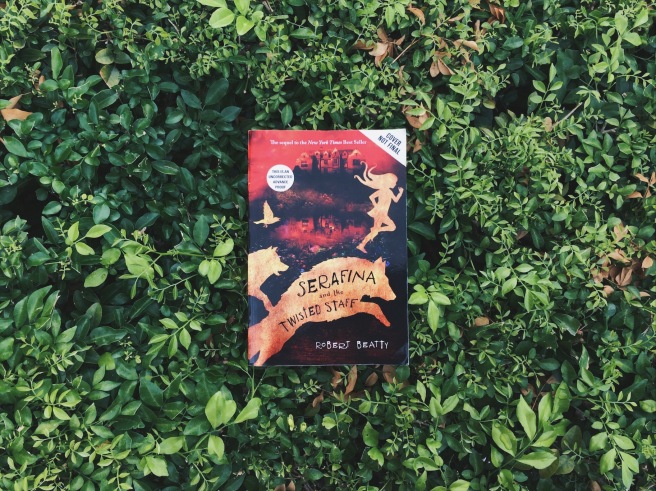 Serafina’s defeat of the Man in the Black Cloak has brought her out of the shadows and into the daylight realm of her home, Biltmore Estate. Every night she visits her mother in the forest, eager to learn the ways of the catamount. But Serafina finds herself caught between her two worlds: she’s too wild for Biltmore’s beautifully dressed ladies and formal customs, and too human to fully join her kin.

Late one night, Serafina encounters a strange and terrifying figure in the forest, and is attacked by the vicious wolfhounds that seem to be under his control. Even worse, she’s convinced that the stranger was not alone, that he has sent his accomplice into Biltmore in disguise.

Someone is wreaking havoc at the estate. A mysterious series of attacks test Serafina’s role as Biltmore’s protector, culminating in a tragedy that tears Serafina’s best friend and only ally, Braeden Vanderbilt, from her side. Heartbroken, she flees.

Deep in the forest, Serafina comes face-to-face with the evil infecting Biltmore—and discovers its reach is far greater than she’d ever imagined. All the humans and creatures of the Blue Ridge Mountains are in terrible danger. For Serafina to defeat this new evil before it engulfs her beloved home, she must search deep inside herself and embrace the destiny that has always awaited her.

I received a review copy from the publisher which in no way swayed my opinion about the work.

NOTE: This review contains spoilers for Serafina and the Black Cloak.

Compellingly readable and exceedingly satisfying, Serafina and the Twisted Staff is a delightful sequel to its predecessor.

The novel picks up three weeks after the events in The Black Cloak. Serafina’s existence is now known to the folks of Biltmore Estate. Her pa is teaching her table etiquette and her momma the ways of the catamount. But the arrival of a mysterious evil force threatens Serafina’s newly found peace in her home. A near-fatal encounter in the forest. A series of puzzling attacks in Biltmore. Two strangers. One returning character. She can’t join her momma and half-siblings because she’s too human to survive in the wilds and she can’t possibly stay in the estate after a tragic accident that separates her from her only ally and friend, Braeden Vanderbilt. But she’s Serafina, Chief Rat Catcher of Biltmore Estate and Guardian of the Blue Ridge Mountains, and she’s ready to fight for her home and the humans and creatures in it. There’s quite a lot to unpack from Serafina and the Twisted Staff. For one, there’s a distinct growth in characters, themes and storytelling as the author further examines friendship, family, self-discovery, bravery and what these all mean to twelve-year-old Serafina. For another, it’s a 370 pages of running and plotting and fighting for and against animals.

I command Beatty for managing to write a fast-paced, action-packed narrative while at the same time have his heroine’s different relationships with other characters be a central and overt part of the book. The mother and daughter bond is fleshed out more in the little airtime they get together. Serafina’s friendship with Braeden flourishes but also hits a roadblock. The author introduces a cast of new characters, three of whom Serafina befriends. There’s Lady Rowena Fox-Pemberton, visiting and staying in the estate indefinitely, and Essie Walker, a servant to the Vanderbilts. The former is obviously a foil to Serafina, with her snooty English conduct, and the latter is a nice, uncomplicated friendship that balances things out. And I like how the novel presents the reader with various faces of girl power through them: Serafina is fierce, loyal and will fight tooth and claw for those she loves; Lady Rowena is cunning, subverting conventional expectations time and again; and Essie is the quiet, modest kind. The third new friendship is with a feral boy, whom Serafina meets the night she is attacked by the strange bearded man and his wolfhounds in the forest, and whom I only wish we got to see more of.

Another overarching themes in Serafina and the Twisted Staff are identity and sense of belongingness. Serafina’s constant struggle to bridge the gap between her two worlds and find who she is and who she can become is something readers will surely identify with, irrespective of age and gender. Although, it sometimes felt dangerously leaning towards YA territory in certain scenes (then again, I have an uncorrected copy). And you don’t need to know your history to appreciate Biltmore Estate and its lavish rooms. The author does incredibly well in setting up the scenery with expansive brush strokes, grounding it in historical accuracy but also taking artistic license here and there. Just as capable he is in pulling off the turn of events leading up to the reveal. I was utterly fooled.

“As she tried to envision her future, she realized there were many paths, many different ways to go, and part of growing up, part of living, was choosing which paths to follow.”

Immensely entertaining and positively imaginative, Serafina and the Twisted Staff is a win for middle grade fiction.

Robert Beatty lives in the mountains of Asheville, North Carolina, with his wife and three daughters. He writes full-time now, but in his past lives he was one of the pioneers of cloud computing, the founder/CEO of Plex Systems, the co-founder of Beatty Robotics, and the CTO and chairman of Narrative magazine.

Have you read this one? Have I convinced you to check it out? Are you into MG? What are some of your recent MG reads? Or your favorite ones? Throw ’em recommendations to me!

2 thoughts on “REVIEW: Serafina and the Twisted Staff by Robert Beatty”

What are your thoughts? Cancel reply